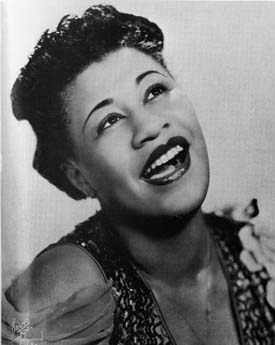 The broad strokes story says she was discovered singing at the Apollo Theater and was offered a spot with the Chick Webb Orchestra.

The details are a little more interesting…

Mario Bauzá, the great Cuban musical wizard who was Webb’s musical director, heard about her from a stage electrician who worked at the Apollo.

He took the time to seek her out and give her an audition and was wowed by her.

He arranged an audition with Webb, but Webb was not impressed.

Bauzá’s enthusiasm for her prevailed and she was given a shot at a college gig at Yale University.

The audience loved her and in Bauzá’s own words: “We couldn’t get her off the stage the people loved her so much.”

Mario Bauzá’ is not a familiar name to many jazz fans. He should be.

In 1933, he became the musical director for Chick Webb’s orchestra, to many the hottest jazz band of the 1930s.

In 1938, he joined Cab Calloway’s band and arranged for Dizzy Gillespie to get a place with that unit. When Dizzy was starting his own orchestra and expressed interested in Cuban music Bauzá introduced him to the legendary Cuban percussionist Chano Pozo.

For the rest of his too-short life, Pozo worked closely with Gillespie co-writing Manteca and Tin Tin Deo.

In 1941, Bauzá became musical director of Machito and his Afro-Cubans, the ultimate Afro-Cuban jazz orchestra. In 1942, he discovered and brought the young Tito Puente into the band.

From being musical director to one of jazz’s hottest bands to discovering Ella Fitzgerald to bringing Chano Pozo and Dizzy Gillespie together to helping launch the Latin Jazz revolution, Mario Bauzá is one of the key figures of jazz.