Does the street scene look familiar?

It should. Santiago de Cuba (and Havana) were the architectural models for New Orleans.

New Orleans is far more Cuban in look than French. (Havana administered New Orleans when the Spanish controlled it during the important formative years between 1763 until 1803.)

In 1793, 30,000 French growers, refugees from the slave rebellion in Haiti, arrived in Cuba, mostly in Santiago de Cuba.

After a period of over 15 years in which they absorbed Cuban culture, these same people were expelled from Cuba between 1809 and 1810 by the Spanish after a political dispute between Spain and France. Most went to New Orleans where they had a huge impact on that city’s culture and music.

(Interestingly enough one of Cuba’s most beautiful and music cities, Cienfuegos, was founded by settlers from Bordeaux and Louisiana in 1819, so the influence flowed both ways.)

Since the 19th century, La Familia Valera Miranda has played a significant role in Cuban culture by collecting & preserving the deep-rooted traditions of the legendary Sierra Maestra mountain region. Original members of the family were subsistence farmers in the rural areas of the Oriente (eastern Cuba), primarily the Cauto River valley near the villages of Bayamo & Las Tunas. Later, they migrated to the areas around Santiago de Cuba & Guantánamo where they reside today.

The Valera & Miranda ancestors brought with them religious elements of Bantu origin alongside secular customs from the Canary Islands & Andalucía. These influences are found in their songs & the musical instruments they play. 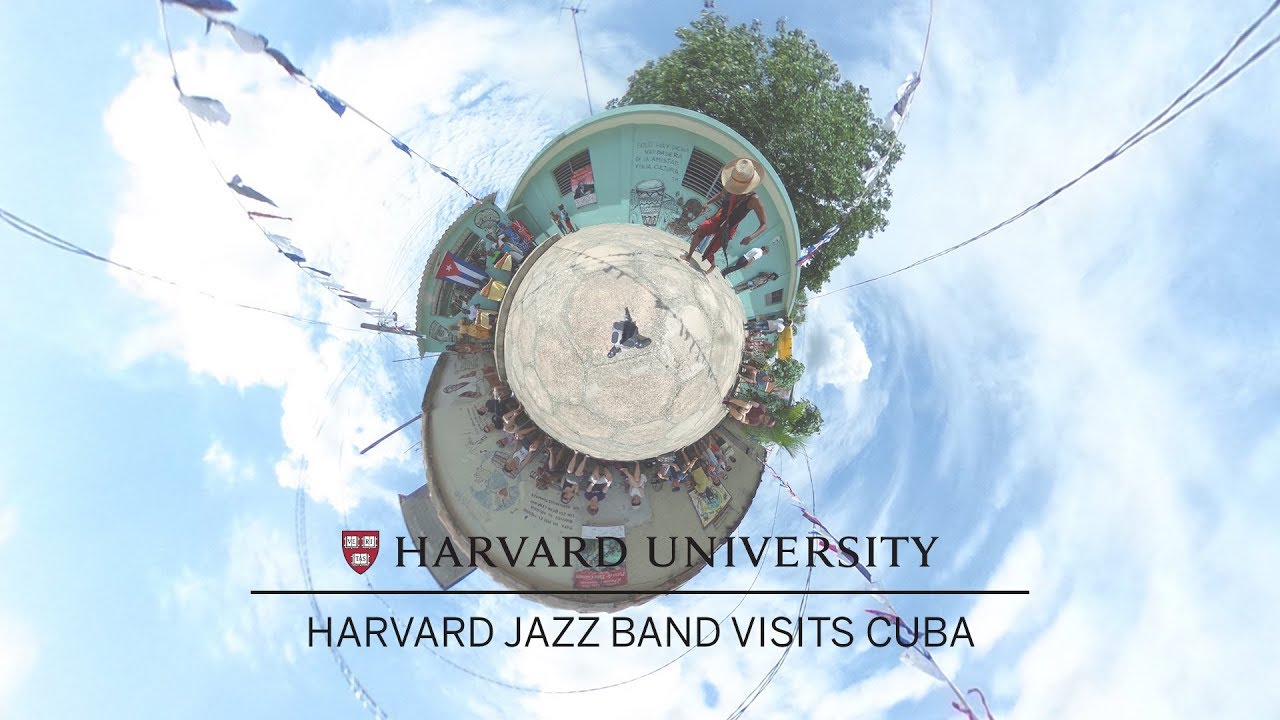 You’ve got to hand it to Harvard. They’ve got money and in this case they knew how to spend it.

This short video is an excellent musical and visual survey of some of the best that the western part of Cuba has to offer music lovers.

Cuban saxophonist, percussionist and composer Yosvany Terry directs the jazz bands at Harvard where he is also a Visiting Senior Lecturer on Music.

He arranged to bring the school’s jazz band and other students to Cuba for a nine day tour.

They also visited three conservatories in Havana, Guillermo Tomás, Amadeo Roldán, and the National Schools for the Arts (La Ena), something casual tourists can’t do. 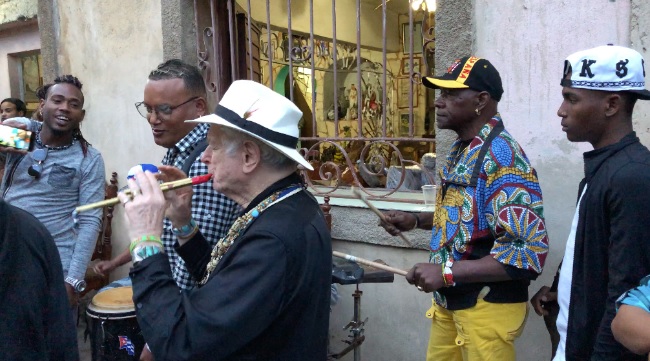 It’s about an hour and a half east of Havana by car along a very well maintained highway.

It’s one of the most important centers of Afro-Latin music and religion in the world, yet as the subtitle of Miguel Bretos’ excellent book on the city says, it’s “The Cuba Nobody Knows.”

More accurately, it’s the city casual tourists don’t know. Everyone who is knowledgdable about Afro-Cuban music and religion knows all about the city.

Jazz on the Tube took David Amram there (it was his first visit to Cuba outside of Havana) to visit Los Muñequitos de Matanzas. David Amram jamming with Los Muñequitos de Matanzas in front of their headquarters.

A Los Muñequitos rumba to celebrate the birthday of the young daughter of one it its members.

There are three varieties of rumba: Yambú, Guaguancó and Columbia. You’re looking at Yambú.
Los Muñequitos de Matanzas in concert in Matanzas.

Alturas de Simpson. It’s a neighborhood in Matanzas, Simpson Heights, and also the title of an iconic danzón (1879) written by Miguel Faílde who was a pioneer of the genre. This is the view from Ermita de Monserrate. On one side of
the ridge is the city and bay and on the other is this. I judge countries on how well they take care of their children.
In that category – and many others – Cuba is #1 Matanzas: Those who know, know. Those who don’t, don’t. 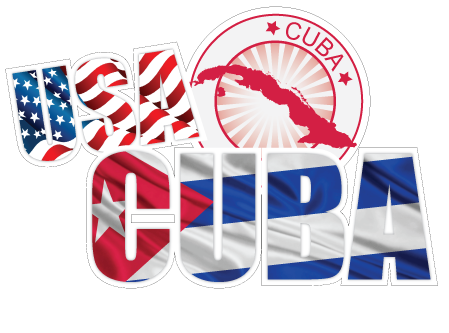 Can U.S. citizens travel to Cuba legally as individuals?

Check everything I say with your own research, common sense, and your own attorney.

Travel journalists and tour companies which charge $300 to $500+ a day for $100 worth of services (or less) aren’t going to do your research for you. They would like you to believe that you can’t visit Cuba legally without their “assistance.”

This audio explains the other side of the story

First, read the law. You might want to print it out and carry it with you.

Click here for: Report published in the Federal Register

(a) General license. The travel-related transactions set forth in §515.560(c) and other transactions that are intended to provide support for the Cuban people are authorized, provided that:

(ii) Independent organizations designed to promote a rapid, peaceful transition to democracy; or

(2) Each traveler engages in a full-time schedule of activities that:

(ii) Result in meaningful interaction with individuals in Cuba.

(3) The traveler’s schedule of activities does not include free time or recreation in excess of that consistent with a full-time schedule.

What does this mean in the real world?

1. To my non-attorney eyes, the law permits individual American citizens to travel for the purpose of providing “Support for the Cuban People.”

Support for the Cuban people is defined as activities intended to “promote independent activity intended to strengthen civil society in Cuba.”

2. The law prohibits and provides a list of entities you, as an American citizen, may not do business with.

3. The law requires that you engage in activities in support of the Cuban people on a full time basis (practically speaking six hours a day, five out of seven days a week) and specifically forbids things like laying around on the beach drinking daiquiris (unless it’s your “time off.”)

Here are two credible sources that attempt to define what this vague language means in practical terms:

4. The law requires that you keep records of your trip for five years in case some bureaucrat shows up at your door someday asking you why you went. Records would be a simple diary and receipts.

Based on my ability to read simple English – and to avoid being flimflammed – it appears to me that if I follow these guidelines I can travel to Cuba legally.

Does that mean that you or I can do this without hassles from U.S. government functionaries?

We may or may not avoid hassles coming back into our own country, but as you probably know there are U.S. government functionaries ready to hassle you about virtually everything – including coming home from countries like Canada, Mexico, the UK and Switzerland.

To defuse potential hassles coming back into the “Land of the Free” (the US):

Listen to my audio. Read the resources I’ve linked to. Forewarned is forearmed.

If, after you’ve done your own research and thinking, you want to go to Cuba as an independent traveler, we can help.

“Decían que yo no venía y aquí usted me ve” (They said I wasn’t coming and here you see me!)
– Benny More

In 1977, David Amram visited Cuba for his first and only time with Dizzy Gillepsie, Stan Getz, and Earl “Fatha” Hines.

Now 40+ years later, this lifelong student of the music is returning to Havana where he’ll be featured at the Havana jazz Fest. 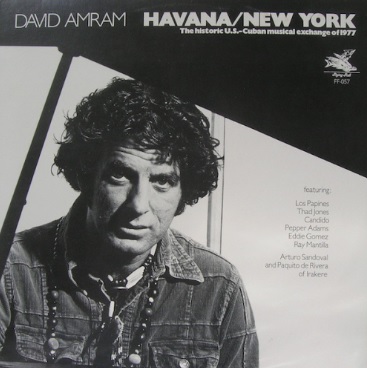 David Amram and Jazz on the Tube head to Cuba

In 1977, the Carter administration gave permission to a group of US jazz musicians to travel to Cuba the first such trip in the fifteen years after the Revolution there.

Now, forty plus years later, Amram is making a long-awaited return trip, this time for a week to perform at the Havana Jazz Festival – an invitation facilitated by Jazz on the Tube.