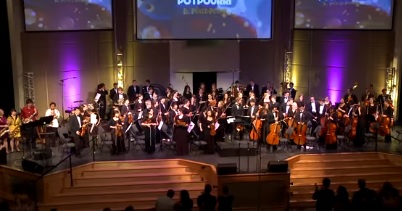 New Brunswick is a province in the country of Canada. It has less than a million people total and a good number of them are in rural areas.

There may be some Latinos in the province, but my guess is it’s less than 1%.

So how do you explain the existence of this orchestra and this performance?

First, Canada, like every other developed country in the world (except the U.S.) makes a serious investment in music education for youth.

Second, the orchestra’s director Antonio Delgado. His training is rooted in his experience as conductor of the world renowned “Sistema Nacional de Orquestas Juveniles e Infantiles de Venezuela” (National System of Youth and Children’s Orchestras of Venezuela), a group every music educator should study carefully.

For the youth orchestra of a small Canadian province to top the European youth orchestras of places like Germany, France and Italy is like the Estonian basketball team winning the NBA finals. It’s an amazing accomplishment – and you’re watching the group that did it – and they did it with Cuban music!

And then there is this…

Japanese people are crazy – but in a very good way!

Honestly, who else would have thought of combining Beethoven’s Fifth Symphony with Pérez Prado’s Mambo Number 5?

Here’s the original with some great photos from the Golden Age of the Palladium Ballroom.