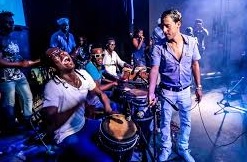 A stage performance by the group Osain del Monte.

The drums they are playing are called Batá.

First, a highly relavent quote which I’ve heard on tape, but have never seen in text on the Internet. Here it is for the first time in print:

“Playing a musical instrument is a form of worship – and I’ve been worshipping all my life.”

This quote explains more about the African approach to music than any hundred volumes can (though I think Johan Sebastian Bach would be in agreement with it too.)

Santeria is a serious subject that deserves serious consideration. A book that many hold in high regard and was written by an Oba (an experienced Santeria priest) is “Walking with the Night” by Raul Canizares. The book comes with a brief glossary and bibliography.

Santeria originated in what is now Nigeria and is the most widespread of the African cultural and spiritual traditions in Cuba.

The name of this performance is “Osain del Monte.” It’s named after one of the orishas of Santeria in Cuba, Osain (in Africa “Osayin”), the orisha of healing herbs and all plants and vegetation.

There are many. Here are just a few of the ones that made it from Africa to Cuba:

Eleguá, Lord of the Crossroads (and a playful trickster). Red and black.
Ogún, The Lord of Metals. Green and black.
Yemaya, The Owner of the Seas. Blue and white.
Ochún, The Queen of the Rivers. Gold.
Changó, Lord of Fire and Lightning (and music and drumming). Red and white.
Orula, Master Diviner. Yellow and green.
Babalú-Ayé, Disease and healing. Walks with a crutch.
Obatalá, Creator of the world and all humans. White.
Oyá, The Owner of the Wind. Rainbow.

Each orisha has its own costume and array of elaborate rhythms and songs and movements and dance. In Africa, they even had their own drums, but in Cuba all the orishas use Changó’s drum.

Based on the color hints in the short list of orishas above, see how many you can identify in this performance.

Santeria originated in the Oyo Empire (Yorubaland), now within the boundaries of Nigeria.

What was this kingdom like before it was destroyed?

First, it was the most urban of traditional African cultures.

Here’s what the remnants looked like to the American missionary, R.H. Stone who visited the Yorubaland city of Abeokuta in the middle of the 19th century:

What I saw disabused my mind of many errors in regard to Africa.

The city extends along the bank of the Ogun for nearly six miles and has a population of approximately 200,000…

They were well dressed and industrious providing everything their physical comfort required.

…Women…spin, weave trade, cook, and dye cotton fabrics. They also make soap, dyes, palm oil, nut-oil, all the native earthenware, and many other things used in the country.

Vast looting and destruction by Europeans removed much of the evidence of this civilization (much like the Roman’s calculated eradication of Carthage), but the statuary that survives shows that this was a very sophisticated society indeed – as does its singing, drumming and dance which lives today.