A night at the Palladium Ballroom 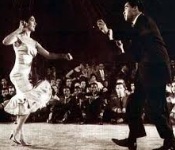 The clip starts out with the recollections of two Palladium Ballroom dancers. Then we go into a short film made about the place in 1955.

Some perspective for younger people:

1. Film was still an expensive and unwieldy technology back in the 1950s so rough as this footage is, it’s great someone made this film of the place in its prime.

2. If everyone looks overly dressed up, this is how people put themselves together in those days when they went out. The jeans and t-shirt, ditch-digger-on-a-break look was still a decade away.

What was the Palladium Ballroom?

Like CBGBs for punk rock and the Birdland for bebop, the Palladium was THE place for Latin music in New York City in the 1950s.

It was a second-floor dance hall at the corner of 53rd Street and it was huge. It could fit one thousand dancing couples.

Latin orchestras shared the bill with mainstream jazz orchestras throughout New York City in the 40s and 50s, but “Latin” places were all uptown in Spanish Harlem and the Bronx.

In 1948, event promoter Federico Pagani approached the Palladium’s owners Max and Helen Hyman with an idea to bring new energy to the place which at that point was in commercial decline.

The idea was a Sunday matinee featuring Latin music exclusively. At that time, this was the first club to try this “downtown.”

From the opening night, it was a huge success with dancers, but there was an initial glitch. Max Hyman was worried about the number of black and Latino dancers who were showing up.

While New York did not have the same kind of Jim Crow laws of the south, there was an informal segregation especially downtown.

Pagani reportedly said to Hyman words to the effect: “What do you care more about black or green?”

The music was non-stop and off-the-hook starting with the orchestras of the “Big Three”: Machito, Tito Rodríguez, and Tito Puente.

Mass dance classes were given to the crowds that attended.

Jazz cats loved the place and sometimes sat in with the featured bands.

The only people who didn’t like it were the top brass at the NYPD who, in their role as the scourge of black culture in NYC, harassed the place constantly.

A huge drug raid in 1961 led to the Palladium losing its liquor license, a financially crippling blow. That and cultural shifts brought in by rock and roll led the its closing in 1966.

Bronx-born Orlando Marin, a Palladium orchestra leader still performs regularly in the New York City area. If you get a chance to see him, do not miss it.