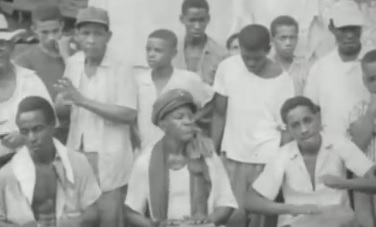 “Al Compas de Cuba” is a survey of essential roots Cuban music released as a documentary in 1960.

It’s attributed Mario Gallo. What’s strange about this attribution is that the Italian-born Argentinian Maria Gallo was born in 1878, died in 1945 and his last film was made in 1919.

The titles are written in Italian and the surnames of some of those credited with the production are Italian. (If anyone can clear up the mystery of how a man who died in 1945 directed a documentary that was released in 1960, please let us know.)

Musical forms developed in Cuba displayed in this film are:

The narration is in Spanish.

The first piece is a Danzon. Note the European kettle drum sneaking in some Afro-Cuban rhythms. Also note the movement of the dancers: European on the top and African below.

You can still hear the danzon performed for dancers in public outdoor settings in Mexican cities like Merida and Veracruz, two places that had a lot of contact with Cuba.

Then a segment of a Santeria service.

Finally, the music of the Abakuá secret society.