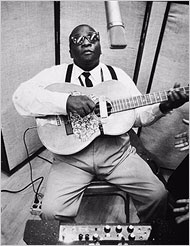 If you want to be conversant with Cuban popular music standards there are over a dozen Arsenio Rodriquez you must learn.

But that’s not all.

1. In an era of “plunk, plunk,” he told his bass players to make their instruments sing thus becoming one of the creators of the bass riff.

2. He put the clave back into the son after it had been gradually watered down in the 1920s and 30s.

4. He invented the Latin horn section, being the first to double, then create a triple trumpet section.

5. He substituted the piano for the tres, exploding the contrapuntal and harmomonic possibilities of Cuban popular music.

6. He had his bongo player use a cencerro (‘cowbell’) during montunos (call-and-response chorus sections)

7. He included the conga in the line up of his band, the first to do so.

If his music sounds familiar and not terribly innovative, it’s because so many thousands of Latin musicians have copied from his playbook over the decades that they’ve completely normalized his revolutionary breakthroughs.

The more you know about the evolution of Cuban music in the 20th century, the more you’ll appreciate what a giant Arsenio was. And there’s a lot more than to his story that I covered here.