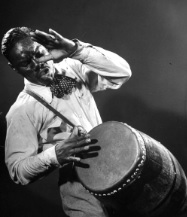 Fans of American jazz know about the Chano Pozo’s famous collaboration with Dizzy Gillespie, but there is much more to his life and career.

Chano was born Luciano Pozo González on January 7, 1915 in a very poor neighborhood in Havana.

In his early teenage years, he was introduced to Santería, also known as “La Regla de Ocha”, an Afro-Caribbean religion derived from the beliefs of the Yoruba people of Nigeria. He was also involved in the Abakuá secret society and Palo which has its roots in the Congo.

Pozo was a colorful, energetic character engaged in all kinds of activities, some legal, some less-than-legal, but he was best know for his drumming, dancing and the award winning compositions he wrote for Carnival parades.

One of these tunes “La Comparsa de los Dandys” is to this day a kind of unofficial theme song for the city of Santiago de Cuba and is a familiar standard at many Latin American carnivals.

Chano was involved in the battle to break the color barrier in the Cuban music industry which at the time excluded dark skinned black from professional opportunities.

In 1947, he moved to New York City for better opportunities encouraged by his friend Miguelito Valdés.

That same year he met Dizzy, recorded with him and many others, and went on tour in Europe. A year later, his promising life was cut short in a pointless act of violence on a New York City Street.

Many of the tunes on this playlist feature Chano’s friend Miguelito Valdés on vocals.