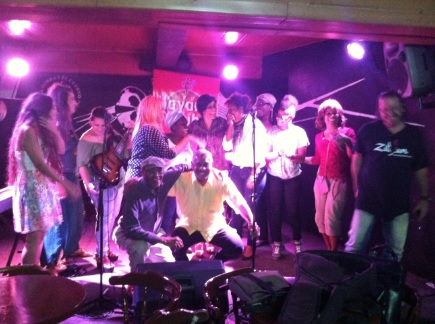 The truth is this scheduling only required a little rearranging of Zorra’s schedule since all of these bands already play there regularly when they’re in the country.

On Wednesday, March 8, International Woman’s Day (a holiday which began in NYC in 1909), the club hosted an all day conference on women in jazz in Cuba.

After a day of fruitful and enlightening discussion, the featured bandleaders got on stage with no rehearsal of any kind, someone called the tune “Besame Mucho” and this resulted.

Apologies to the bass player whose solo got cut off midstream. I ran out of memory and had to jettison files before I could start filming again. The whole gang.
Click on the photo to enlarge it Now let’s go to the event that brought us to Havana in the first place: Fiesta del Tambor, Festival of the Drum.