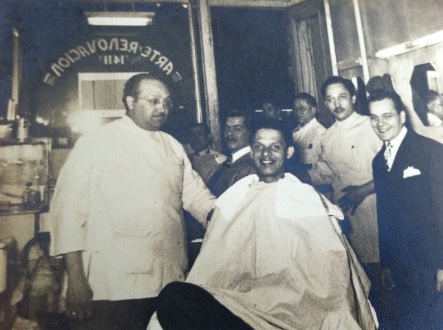 Gilberto Valdés is eight-eight years old this year. We had the wonderful opportunity to meet him and spend some time talking jazz.

Havana-born, as a five year old he was introduced to American jazz by his young uncle, Raul Zequeira, who was just nine years older than him. During his childhood Gilberto accompanied his uncle to many parties and social gatherings where American jazz and pop music was au courant.

Later as a young man, Gilberto made frequent trips to New York City where he stayed with his step-father, Humberto Gelabert, a former sideman with Benny Carter and the bandleader of his own Cuban orchestra. Humberto also owned a popular barbershop in East Harlem.

During these trips, Gilberto went to the Savoy Ballroom, Minton’s (where he sat in one night), Birdland, and the Palladium Ballroom.

What he learned, he brought back home and among other things helped pioneer bebop on the island.

In 1957, while his vocal quartet “The Cavaliers” was performing at San Souci, the preeminent nightclub in Havana, he met Roy Haynes who at the time was the drummer in Sarah Vaugh’s Trio. Haynes gave Gilberto a set of drum sticks as an encouragement to take up the drums, which he did.

He spent the first half of the sixties in Europe where he reconnected with his Uncle Raul who had moved to Paris after World War II and had his own band.

As the last picture in this series shows, he’s a beloved figure in Havana’s jazz scene where he’s been an educator and mentor to countless young jazz musicians.

Along with pianist and bandleader Bellita, he played a key role in saving Cuba’s most important jazz club El Zorra y La Cuarva from being turned into a pizzeria! Gilberto started as a professional singer in high school specializing in Harmonical Vocal Quartet music and continued with singing groups his entire career. Gilberto is on the far right. A television pioneer in Cuba. Gilberto on the far right A publicity shot from the White Elephant in Paris in the 1960s.
Gilberto on timbales Gilberto on drums with Bebe Valdés in Sweden in the 1960s Sammy Davis Jr. on congas and Gilberto on timbales Gilberto (with tie) brought Irakere to New York City and the world.
Chucho Valdés on the left. The President of CBS’s Record Division Bruce Lundwald on the upper right. Conga player Oscar Valdés (no relation) on the lower right In front of Casa de la Cultura de Plaza, the birthplace of the Havana Jazz Festival, Gilberto with youngest son of Jorge Varona, who played with Irakere during Irakere’s visit to US Gilberto with special friends – March 2017.
Up front, to the left of the man in yellow, Waldo Nelson Cárdenas
of the Havana jazz club El Zorra y La Cuerva

To find out who these special friends are, click here.