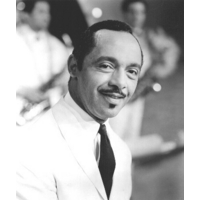 In his case, he moved to Mexico City in 1949 which was experiencing an economic and social boom.

Mexico had a large motion picture industry at the time which means that Prado who was very popular had ample opportunities to have his work documented on film.

It’s a bit hard to find clips of him that are not part of elaborate Hollywood-style spectacles, but we found this one above.

The video below is example of the kind of dance and staging that accompanied his Mexican film work.

Lilia Prado, the popular Mexican actress and dancer (“the Mexican Marilyn Monroe”), is featured in this clip. Despite sharing a last name, she and Pérez were not married.

Our young friends from Cuba play “Qué rico el mambo” at the United Place in New York City on their first trip to the US for an audience of school kids.