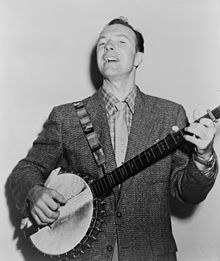 Everyone knows at least one Cuban song: “Guantanamera”

Because it’s beautiful – and because Pete Seeger worked so hard to put it on the global music map.

Seeger learned the song in 1962 from a Cuban musician named Hector Angulo from Santa Clara, Cuba who was working at a children’s summer camp in the Catkills.

He recorded it live at Carnegie Hall in 1963, the year after the Cuban Missile Crisis, and it appeared on his album “We Shall Overcome.”

Over the five plus decades that he performed it – it was one of ihs favorite songs – he encouraged his audiences to sing along and learn a little Spanish in the process.

A “Guantanamera” means a girl from the musical eastern Cuban city of Guantanamo. A “guajira” is a farmer-peasant girl. (A guajira is also a type of Cuban song.)

In 1959, Julián Orbón, professor at the Manhattan School of Music where Angulo was a student, adapted stanzas from Cuban poet and revolutionary hero Jose Marti’s (1853-1895) poem “Versos Sencillos” (Simple Verses)

Others who recorded it include Joan Baez, Jose Feliciano, Los Lobos, Celia Cruz, The Sandpipers, Julio Iglesias, Gloria Estefan, and even Pitbull.

What about the rest of the words?

In honor of the great spirit Peter Seeger (1919 – 2014) who brought the song to worldwide attention, here we go.

Note: There are many variations. Here’s one:

Yo soy un hombre sincero
(I am a truthful man)
De donde crecen las palmas
(From this land of palm trees.)
Y antes de morirme quiero
(And before dying I want…)
Echar mis versos del alma
(to share these verses from my soul)

Here’s the song performed by its composer, Joseíto Fernandez, his version, his original words.

Note the Cuban piano wizard who kicks in at 5:19.

If anyone knows who this might be, please drop me a line.