The Cuban adventures of Steve Coleman 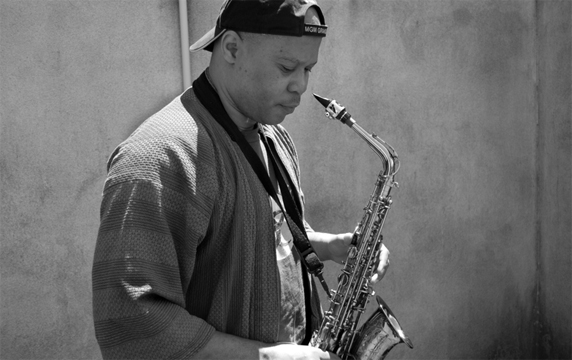 Steve Coleman in Matanzas (2017) with members of Rumba Timba. The group is made up of some of the younger members of Los Muñequitos de Matanzas. Luis Cancino Morales on the bells.

It all started with Coleman’s interest in the philosophical underpinnings of music and how complex cultural ideas are transmitted through music.

Anyone interested in this subject has to look to Africa and anyone in North America interested in African culture would do well to take a prolonged trip to Cuba.

For one thing it’s closer, but more importantly for historical reasons the concentration and variety of African cultural systems in Cuba is unprecedented anywhere on earth – even in Africa itself.

Coleman’s first visit to Cuba was in January 1996 where he wisely went straight to Mantazas one of the wellsprings of Afro-Cuban Culture.

This was followed up by a twelve day long collaboration in Havana with AfroCuba de Matanzas in February of the same year.

This initial collaboration culminated in a performance at the Havana Jazz Festival and a recording session at Egrem which produced the album “The Sign and The Seal by Steve Coleman and The Mystic Rhythm Society.

Here’s a documentary shot during the years right before Coleman went to Cuba (1993 to 1995).

In addition to being a composer, band leader, and instrumentalist, Coleman is also an educator.