Things missing from the historical record

Scholars are all about paper.

If it’s not on paper, it didn’t happen.

This presents are problem for future scholarship on the subject of Afro-Cuban and Latin jazz.

There’s a similar scholarship problem in the area of contributions of Gaelic to American English for the same reason.

In both cases, the people involved were so busy with the challenges of simply making a living, they didn’t have time to document and archive and mainstream society wasn’t interested in helping.

Bringing the Irish into this may seem like a tangent and in some ways it is, but not really.

The word “jazz” is Gaelic.

“What?”, you say. “Jazz is an African word that means ‘sex’ or something.”

Here’s the definitive rebuttal of that nonsense

Jesse Sheidlower, editor at large for the Oxford American English Dictionary, wrote in Slate magazine, in December, 2004: “The African etymology of jazz was fabricated by the New York press agent Walter Kingsley in 1917.”

The truth is the first time that “jazz” ever appeared in print was 1913 in an account in the San Francisco Bulletin about a baseball game written by an Irish-American “Scoop” Gleeson.

“Come on, there Professor, string up the big harp and give us all a tune Everybody has come back to the old town full of the old ‘jazz’ and they promise to knock the fans off their feet with their playing.

“What is the ‘jazz?’ Why, it’s a little of that ‘old life,’ the ‘gin-i-ker,’ the ‘pep,’ otherwise known as the enthusiasalum. A grain of ‘jazz’ and you feel like going out and eating your way through Twin Peaks. It’s that spirit which makes ordinary players step around like Lajoies and (Ty) Cobbs

“‘Hap’ Hogan gave his men a couple of shots of ‘near-jazz’ last season and look what happened — the Tigers became the most ferocious set of tossers in the league. Now the Seals have happened upon great quantities of it in the quiet valley of Sonoma and they’re setting the countryside on fire.”

“Pep” was a very popular word in that era, but what about “gin-i-ker?”

“Gin-i-ker” is the phonetic spelling for the Gaelic phrase “Tine Caor” which means “raging heat and lightening.”

The Gaelic word “teas” is related to “tine”. It means “heat of the highest temperature.” In human emotional terms that would mean “hot”, “exciting”, “passionate.”

And in Gaelic the word “teas” is pronounced JASS or CHASS.

In fact, an article was published it in the S.F. Bulletin on April 5, 1913 written by Ernest Hopkins: “In Praise of “Jazz” A Futurist Word Which Has Just Joined the Language.”

“Jazz” jumped the Bay and appeared in The Oakland Tribune on October 4th of that same year.

How did it get to New Orleans and the rest of the country?

Every port city in the US, New Orleans included, was packed with native Gaelic speakers and first generation Irish-Americans. Many worked the docks. Many went to sea.

Many other “mysterious” slang American words come from Gaelic.

When he died, Alex Haley of “Roots” fame was working on a book that showed the close relations between early Irish immigrants and Afro-Americans.

They lived in the same neighborhoods, worked together, dated, married, and had kids together.

What were Africans called in Liverpool in old days? “Smoked Irishmen.”

Most of the Irish who came to the US in the 19th century were from rural areas. They spoke their own language and lived a life that was much closer to tribal than modern. They were impoverished and discriminated against.

Signs on stores: “No Irish or dogs” and want ads that stated “No Irish need apply” were a reality.

In his research Haley discovered that Billy Holiday and Ella Fitzgerald had some Irish blood as did Muhammad Ali and Jim Hendrix.

History is a lot more complicated and rich than we know. 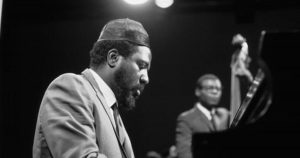