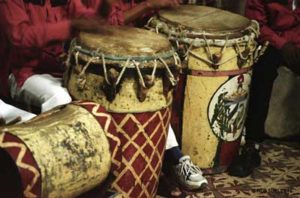 Tumba is “drum” and “Francesa” is French, so it means literally “French drums.”

This documentary by Jimenez Leal y Nestor Almedros is from 1961. The visual quality is not great, but what it captures is, so we went with it. You can find additional videos of this music on YouTube.

Tumba Francesca was in its heyday in the late 19th century when a profusion of sociedades de tumba francesa (tumba francesa societies) flourished. Three remain in operation today.

The Haitian Revolution was one of the most important events in Cuban history, music history, and world history for that matter.

Haiti (then called Saint-Domingue) was a monstrously corrupt place with perhaps the most brutal slave regime the world has ever seen – but it was rich and it invested no small amount of its wealth in music.

In fact, the French musical culture in Saint-Domingue far surpassed anything else in the hemisphere at the time including New York and Boston.

As a result of the Revolution, Haiti became the first country in the Western Hemisphere to outlaw slavery.

During and after the fighting, thousands of Haitians left the island for the United States (including New Orleans), and eastern Cuba where they settled in and around Santiago de Cuba and Guantánamo.

During a war between France and Spain a large number of French in Cuba were expelled. Many went to New Orleans where they literally doubled the population overnight and transformed what was then a backwater into one of the most important centers of musical innovation of the 19th and 20th centuries.

Here’s some of the history of the French Haitians in Cuba:

Carnival '62
Milcho Leviev - East to West to Back Again