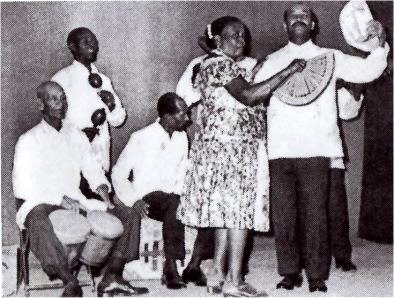 A scene from the movie “Cuba Feliz”

If you don’t speak Spanish and the subtitles aren’t working and you’d like to see what they are singing, you can click on the upper left hand corner of the video and be taken to YouTube to see a subtitled version. (But remember to come back!)

Seventy-six-year-old Cuban street musician Miguel Del Morales, known as El Gallo (The Rooster), travels around Cuba with his guitar, making music in the homes of friends, in bars, and on street corners, in courtyards and stairwells. His rich voice, colored by a lifetime of cigarettes and rum, weathered by the sun and rain, bespeaks the joys and sufferings of his countrymen. An urban troubadour, Del Morales has been called “a living memory of Cuban bolero.”

At one point, he visits a Changüí party.

Here’s some info from wikipedia about Changüí:

Changüí is a style of Cuban music which originated in the early 19th century in the eastern region of Guantánamo Province, specifically Baracoa. It arose in the sugar cane refineries and in the rural communities populated by slaves. Changüí combines the structure and elements of Spain’s canción and the Spanish guitar with African rhythms and percussion instruments of Bantu origin. Changüí is considered a predecessor of son montuno (the ancestor of modern salsa), which has enjoyed tremendous popularity in Cuba throughout the 20th century.

Changüí is related to the other regional genres of nengón and kiribá and is descended from nengón. Technically, the changüi ensemble consists of: marímbula, bongos, tres, güiro (or guayo) and one or more singers.[ Changüi does not use the Cuban key pattern (or guide pattern) known as clave.The tres typically plays offbeat guajeos (ostinatos), while the guayo plays on the beat.

Going deeper into Changüí
Ed Polcer: A life in jazz