Horns to Havana – At the United Palace 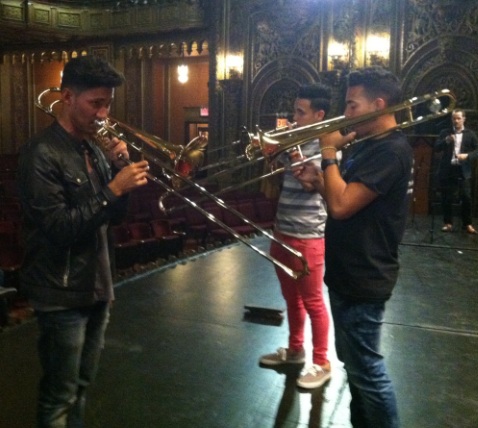 Unfortunately, we missed their Jazz at Lincoln Center performance (we’ll post the video if it ever becomes available), but we did make it to their performance the next day at the United Palace of Cultural Arts at 175th Street and Broadway.

The audience were New York City school children ages six to ten, many of them bilingual English and Spanish speakers.

The orchestra played some classic numbers and arrangements by greats like Benny Carter and Glenn Miller. Then they did some Cuban numbers at which point the little ones jumped up and started dancing. This is what it’s all about. The United Palace really is a palace. A former movie palace built in 1930, it’s been kept in
pristine condition and hosts many cultural events. We met this young trumpet player David Navarro in Havana and were delighted to see
him again this time playing in New York. His first time out of the country. Back stage warming up the tenor

Hidden in plain sight: Cuba and Rock and Roll
Exploring the Soundscape: Cuba and Beyond with Verna Gillis