Karl Berger and Ingrid Sertso (1965 and beyond) (interview)

Music credit: The Jazz on the Tube podcast theme song is “Mambo Inferno” performed by The Manhattan School of Music Afro-Cuban Jazz Orchestra conducted by Bobby Sanabria from the CD ¡Que Viva Harlem!

A promotional video made for journalists as as part of the press kit for Tone Dialing. Ornette’s violin was stolen in a robbery at the Rivington Street school. I lent him mine with a Barcus Berry pickup and he liked it.

Within months of picking up the saxophone, Ornette was a working musicians in some of the scariest dives in Fort Worth, bringing home much needed money for his family whose father, a baseball player and singer, died when Ornette was seven.

We talk about this and other topics and read from A.B. Spellman’s classic: “Four Lives in the Bebop Business”

Erratum:  Spellman refers to Melvin Lastie as “Melvin Lassister, a clarinetist.” It’s possible Melvin also played the clarinet, but he was most known for his trumpet playing.

The Lastie clan is one of the great New Orleans musical families and includes Herman Riley and the Andrews clan (James, Troy and Glenn) in their extended family. Frank Lastie introduced gospel drums to the Spiritual Church. and played with Louis Armstrong in the Waif’s Home Band. The family was very important in the Spiritual Church.

Others episodes from “Ornette: Deep from the Heart of Texas” here:

Part One: Ornette: Deep from the Heart of Texas – Conversation with Dave Oliphant 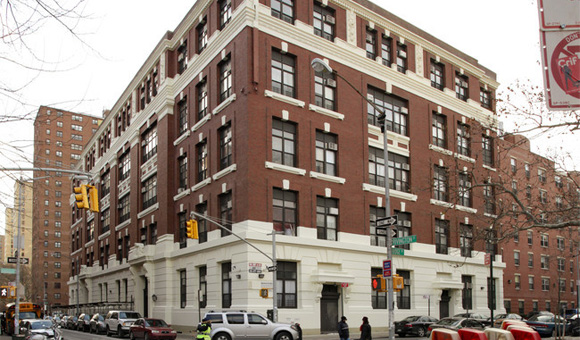 To hear the details of the story – minus the revelation of the surprise payday – click here: “Bowery, Rivington, and Revival”

To recap, in the fall of 1980 when I was 20, I worked for James Jordan, Ornette’s cousin, as an intern at the New York State Council on the Arts.

Jordan mentioned to me that Ornette was trying to buy a building to replace the loft he lost on Prince Street (the legendary Artists House in Soho), but that real estate brokers were giving him the run around.

With the naivete of youth only possible for a 20 year old I said: “That’s crazy. I’ll find him something.”

Jordan sent me to Ornette’s home, a second story loft on the east side of Bowery near Rivington, and Ornette told me what he was looking for. I went out and very quickly stumbled on the fact that the City of New York was auctioning off some surplus real estate including a decommissioned public school on the end of Rivington Street.

I showed him the catalog and he and I walked down to take a look at it. If I remember correctly, the lady who was operating a community school on the first floor of the otherwise abandoned building let us look around.

Five stories – 55,000 square feet – built like a battleship – with a gymnasium, an auditorium, an industrial sized kitchen, and 55 loft sized classrooms with waist-to-ceiling windows.

When auction day came, Ornette had me do the bidding because the whole thing made him nervous.

I sat back while two bidders went at it and then when it looked like one of them was dropping out, I hit the remaining guy with a big bid from out of the blue hoping to stun him. (After all, I did grow up partially in the Bronx and knew how to street fight.) He kept bidding against me for a while until he too dropped out and when the gavel fell the price was $320,000.

Ornette had to come up with $80,000 to seal the deal and this necessity was one of the things that put him on the road and back in the public eye at that time.

Nearly 40 years later, I stumbled on an article that reminisced about Ornette brief time on the Lower East Side which took me to this article which pointed me to this convoluted old legal news item.

I’d always wondered what had happened to the building, but never asked – I was afraid it had ended badly – and even though Ornette and I remained friends up until the end of this life, he never brought it up either.

So I called my corporate finance attorney brother and asked him to do some sleuthing for me.

Now it’s an apartment building in what is now a very hip part of the city .

Based on a back-of-the-envelope calculation, it looks like the building has an annual rent roll of $20,000,000 year. Let’s say the net is half of that. At a very miserly 5% return on capital, the building is now worth $200 million dollars. (That’s how much a cash flow of $10 million a year is worth at 5%.)

So being wildly conservative, let’s say the building is worth a mere $50 million today.

Not only did this work out to be a great deal for Ornette, it may also well have been one the the best returns on investment of any investment made in New York City in the history of the island.

Now I know why whenever I’d see Ornette and there was a third person present, he’d always introduce me as “my best friend.”

Ornette – Deep from the Heart of Texas

Avant-garde genius or one of many Master Musicians who sprung from the earth of one of the most fertile musical cradles the world has ever seen?

Of course, Ornette is both.

In this unique podcast we focus on what others have ignored: How Ornette comes straight from the big open musical heart of Texas.

Move over Brazil, Cuba, New Orleans…Texas is in the house.

3. Eddie Durham wore his hair long and braided in a Native American style as a child, but probably cut it long before becoming an adult. (In addition to being of Afro-American, Mexican and Irish ancestry, Durham’s mother was of Cherokee descent and his father of Mohawk. His first language as a child was Spanish.)

Visit the Jazz on the Tube Ornette Coleman Archive